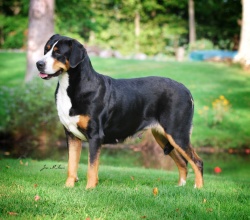 Aare is the girl we kept out of our breeding with Essa and Bruno. Aare is full of fire and shines with personality. She is following her father’s footsteps in the show ring. She is an avid swimmer like her mother. She is named after a river in Switzerland.

She is the mother of our ,

Aare is a talented young girl.  Aare finished her championship at 13 months from the bred by class.  So far she has had a great start to her show career.  She went to her first show at 6 months old she won her first point and the next day took a three point major.  At the 2008 National Specialty in Oxford, Ohio she went Best Puppy in Show.  She has a great future ahead of her with hopes of one day passing her qualities onto her offspring.  Most of all she is a great friend and companion.

Aare is a medium-sized, balanced, and an athletic girl.  She is drafty yet elegant.  She has a good topline, front, and a solid rear.  Aare has a medium length and wavy coat with black undercoat on her body and grayish brown undercoat on her neck.  Her colors are very clear and rich.  Aare has a beautiful and feminine headpiece.

Aare has nice movement. She has a sturdy, but elegant build.   Hopefully she will have a great career as a special.

Aare has a typical swissy personality.  She is friendly after meeting new people.  She loves to play with children, puppies, and small breed dogs.  She is very motherly.  She deals very well with new and different situations.   Aare will soon be tested for her Therapy Dog Title through Therapy Dog Incorporated.  She loves to show off in the show ring.

Aare plays well with most dogs.  She will not go looking to get into it with other dogs she rather stick to herself and be a little independent.  Within the family Aare is alpha.  She has a strong willed personality and takes everything in stride.