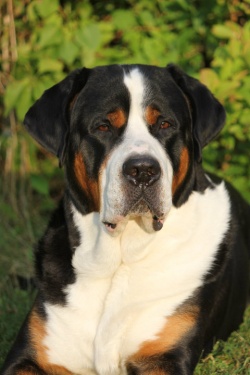 Mader is our happy go lucky boy. He has been a lot of fun and we are very happy with him. Mader has been a joy to have in our home. Mader started showing the summer of 2006. At his first show he won a best of breed at 6 months old. Mader received his Championship at the 2008 Nationals at 16 months. We are proud of our boy. Check out his bio. Mader came from Shadetree kennels. http://www.shadetreegreaterswiss.com

Mader is a special boy and one of a kind.  Mader finished his Championship at 16 months with limited showing with the big win at the 2008 National Specialty in Oxford, Ohio.  He won winners dog and Best of Winners, thank you Pepe (Jose) Anastas.  At his first shows the day he turned 6 months he went winners dog and Best of Breed.  Mader is currently was being expertly handled by Kitty Burke. In 2008, he has been treading the waters as a special.  Mader has been to one show a month from July to November and has made it to the top ten.  At the Blue Ridge Specialty October 10th, 2008 Mader went Best in Specialty at 21 months, then proceeded to win a group 1.  What a great day for the young man.  He has a great future ahead of him with hopes of one day achieving his Versatility title.  Most of all he is a great friend and companion.

Mader is a medium-sized, Tight, Balanced and an athletic dog. He has a lot of breed type, but is not overdone.  He could still perform jobs which the GSMD was breed for.  He has a solid topline, good front, and a powerful rear.  He looks absolutely stunning in the show ring.  Mader has a relatively short coat with black undercoat on his body and dark gray undercoat on his neck.  His colors are very clear and rich in color.  Mader has a beautiful headpiece.  He has a thick, but well rounded neck that is well placed from his shoulders.  He has a modereate layback to his shoulder and nice tight feet.  He has nice rear angles, but a little to much rounding in his croup.  I would also like to see a little more lenth of body.  He always looks happy and is always smiling.

Mader has wonderful movement. He is sturdy and drafty, but moves with ease.  His side gait is exceptional with very strong and true reach and drive.  He is well muscled and agile for his age.  Most people remember Mader from his movement, facial expressions, and crazy antics.

Mader loves everyone.  He loves children, puppies, and small breed dogs.  He helps show the puppies around the yard when they are old enough to go outside.  If a new dog comes over he is the first one to great them and show them the yard and his toys.  He deals very well with new and different situations.   Mader will soon be traveling to Nursing homes and the local hospital to spread some cheer.  In August of 2008 Mader became a Therapy Dog through Therapy Dog Incorporated.  He loves meeting new people and getting lots of attention.

Mader plays well with most dogs.  He will not go looking to get into it with other dogs he rather stick to himself and be a little independent.  Within the family Mader is lowest man on the totem pole.  He is pretty passive and takes things as they come.